This page will be updated as resources and information become available.

As of September 3, the Washington State Department of Transportation (WSDOT) recently completed the first phase of repairs to the Montlake Bridge. The first phase of construction involved a 26-day continuous closure.

The second and final phase of the project will involve five weekend closures between September and November.

These closures will allow the Washington State Department of Transportation (WSDOT) to replace the more than 20-year-old worn grid deck on the Montlake Bridge. Prior to the COVID-19 pandemic, an average 40,000 to 66,000 drivers used the Montlake Bridge every day. This project will keep the bridge in a state of good repair as it continues to support the needs of a growing population. 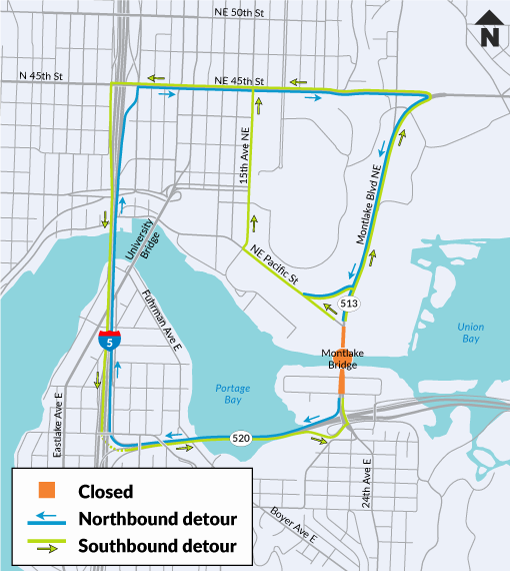 What you need to know about the closures

* Note: if sidewalk access is restricted, a shuttle will be available to transport pedestrians and bicyclists using a detour route.

These are the expected weekend closure dates as provided by WSDOT. Please note: closures will take place from 11 p.m. Friday to 5 a.m. Monday. Dates are subject to change.